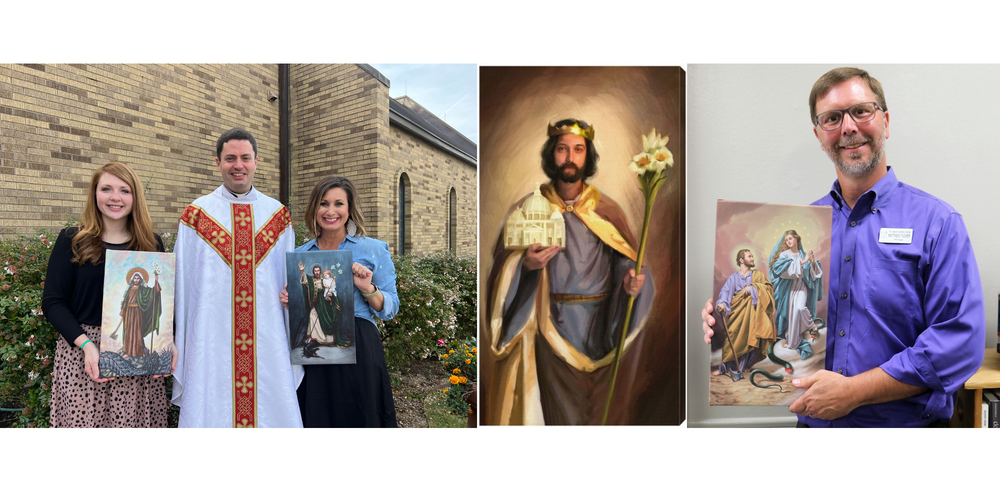 St.Joseph Church and School have been given four paintings of Saint Joseph which were commissioned by Father Dan Calloway. He's both a priest and an author who belongs to the Congregation of Marian Fathers of the Immaculate Conception of the Most Virgin Mary. His recent book,"The Consecration of St. Joseph: The Wonders of Our Spiritual Father," brings to life the wonders, the power, and the ceaseless love of St. Joseph.
With Pope Francis having declared January 1, 2020 to December 8, 2021 as "The Year of St. Joseph," along with him being this church and school's namesake, the receipt of these paintings is both timely and appropriate.
Father Calloway contacted a number of modern artists who paint in the classic style. He wanted them to create what he believes to be truer depictions of this great saint. "As I looked at classic images of St. Joseph through the centuries, the majority of them pictured him as old," Father Calloway said. "He's often in the background and not very prominent. Sometimes he looks soft. They don't really represent the real St. Joseph."
Father Tony Robbins presented these paintings to school administrators on November 10th. One of the artists, Bernadette Carstensen, credits Father Calloway with the inspiration and the composition idea of how he wants St. Joseph to be known. "In reality, St. Joseph could have been a very strong young man close in age to his wife, Mary," Carstensen said. "Father Calloway wanted to counter the tradition of St. Joseph being old, or as a caretaker, to being young and strong."
Ms. Carstensen is the artist who painted the picture given to Elementary School Principal Courtney Pope. Middle School Assistant Principal Hannah Belew received a different painting done by Cecilia Lawrence. Artist Adonai Camilleri Cauchi created the image presented to high school principal Matthew Tucker. The fourth and last gift from Father Calloway will be displayed in the church's Spiritan Center. It shows Saint Joseph as the Patron of the Universal Church who watches over it with paternal love. He is crowned to show his great dignity as the earthly father of Jesus Christ. It was painted by Gabrielle Schadt.