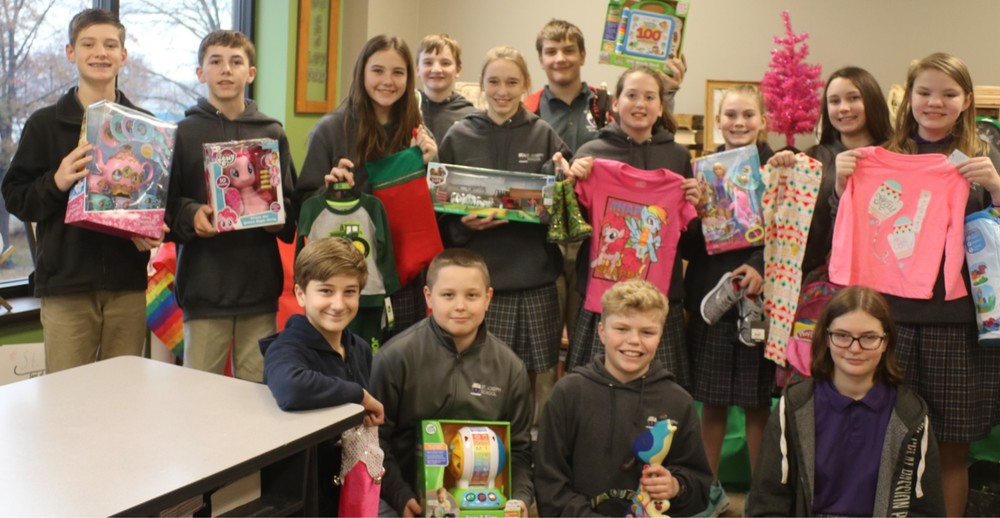 The pictured group of St. Joseph School students in Ms. Theresa Lutes' 7th grade Religion class are seen here posing with Christmas gifts they bought for 18 Faulkner County children living in foster care. The recipients are  between the ages of 9 months and 12 years old and are in foster care either because they were in abusive family relationships or their parents are incarcerated.  The gifts, some of which were requested by the foster children themselves, were purchased through two funding sources; a $500 grant from the Dr. Robert L and Mary Margaret Taylor Foundation and $300 raised from a Jeans Day the students organized in October.
The Taylor Grant first became available in 2000 when the late doctor and his wife started their foundation to benefit the First United Methodist Church and St. Joseph Church for both educational and evangelization purposes as well as missionary work. St. Joseph was not the doctor's place of worship but was included because so many of his loyal patients were members of the parish.
The foster children were chosen by representatives of the local Children's Advocacy Alliance (CAA) and Court Appointed Special Advocates (CASA). Ms. Leia Smith, Ms. Jessica Hess, and Ms. Heather Laferte came to the school on December 13 to speak to the students and pick up the gifts for delivery. Smith is the CAA's Development Coordinator. Hess is a CASA Advocate Supervisor and Laferte is a CASA Recruiter-Trainer.
St. Joseph students first began assisting underprivileged children in this way when the late Stephanie Shachmut was their Religion teacher from 2001-2012. They became known as "Stephanie's Angels" and remain so today.